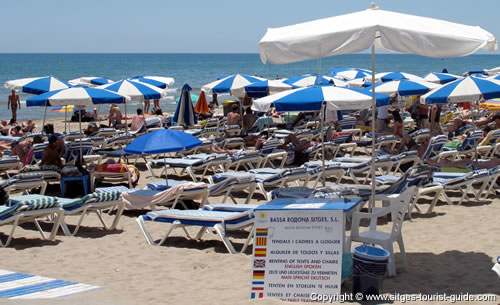 A Beach in Sitges
Sitges is a relatively small town boasting a grand total of seventeen beaches. In general the beaches are all welcoming and unintimidating. However, if you are looking for something in particular you may also be able to find what you want. Sitges has gay-friendly and nudist beaches as well as family beaches. This page will provide a list of Sitges's beaches, providing further information regarding those that may appeal to a particular group.

In general you will find that the beaches that are closest to the city centre are the busiest, whereas those further from town provide a slightly more secluded location. As with most beaches in Spain, you are likely to find topless sunbathers everywhere - this is not limited to just nudist beaches. However, you will generally find this to be more common in the gay and nudist beaches. For example, there is a notable difference in the atmosphere between Platja de la Ribera and Platja de la Bassa Rodona (see below for more details).

This page will give information on the various beaches of Sitges - family beaches, gay beaches, and nudist beaches. For a more general information on beaches in Sitges - sun lounger hire, refreshments, toilets, showers and water sports see our page on Sitges beach facilities.

The names of the 17 Beaches in Sitges

Platja Sant Sebastiá - Another beach sitting to the east of the Sitges church. Popular amongst all groups of people. It stands more on its own than the beaches at the other side of the church.

Platja de la Fragata - A beach that is popular with families and is overlooked by the town's whitewashed church. Volleyball nets and pedalo hire will appeal to children.

Platja de la Ribera - One of the larger beaches - it is busy as it is close to the town. It appeals to all groups.

Platja d'Aiguadolç - Sitges' most eastern beach. Popular with both nudists and those in swimwear. It is a fifteen minute walk from the beach before it - providing relative seclusion.

Platja dels Balmains - One of the three beaches that sit to the east of the Sitges Church. It is mostly nudist. It offers a picturesque setting as there are less buildings behind it, with mountains instead

Platja de l'Estanyol - Another long and busy beach, popular with all groups of people

Platja de la Riera Xica - A rather narrow and long beach. Popular with all groups.

Platja de la Barra - This beach is slightly more of a cove and is towards the edge of town so it can often be less crowded than the more central beaches. Popular with all groups.

Platja de Terramar - Another slightly less busy beach due to its location slightly away from the city centre. Popular with all groups.

Platja de les Anquines- The western-most Sitges beach. It is small and in a cove. A good option if you are looking for some peace and quiet. Popular with all groups.

Sitges' two main nudist beaches are those furthest east, beyond the church - Platja d'Aiguadolç and Platja dels Balmains. Platja dels Balmains is home to a small restaurant overlooking the beach. They are some of Sitges's most picturesque beaches as they have fewer buildings behind them - only mountains.

If you wish to go to these beaches but do not want to go nude, this will not be a problem. The beaches are mixed between non-nudists and nudists and you will feel just as welcome with or without your bikini.

If you decide to head to the nudist beaches you are likely to pass the cemetery - Cementeri San Sebastian in Plaça del Doctor Bartomeu Robert. Take a look inside as it is an interesting place - full of beautiful old statues and quirky tombstones.

There is one main gay beach in Sitges - Platja de la Bassa Rodona. It sits at the centre of Sitges' row of beaches. It is often one of the busiest beaches along the strip. 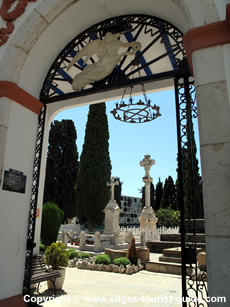 If you are a gay couple and you don't fancy limiting yourself to just Platja la Bassa Rodona, you will feel comfortable on all of the beaches in Sitges. As a famously gay town, there is an open attitude towards openly gay couples throughout the town and beaches.

How to Get There: Once you reach Sitges' promenade, if you are facing the sea with Sitges church on your left, the beach is the third one along from the church. 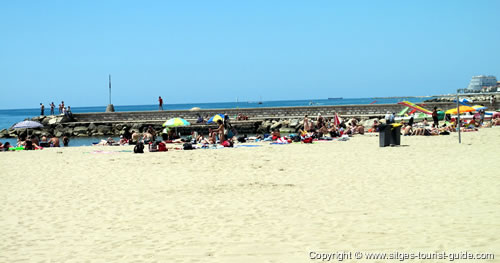 How to Get There: Platja de la Fragata is one of the most central Sitges beaches. It is the one that sits directly below Sitges church.

The beaches of Sitges are lively, clean and busy. You are likely to feel relaxed on all of Sitges's beaches and the differences between them are not instantly noticeable. If you don't plan on bringing a parasol make sure that you are loaded up with sun cream. The beaches do not provide natural shade and in the summer months the sun is strong.

Back To The Top Of The Page